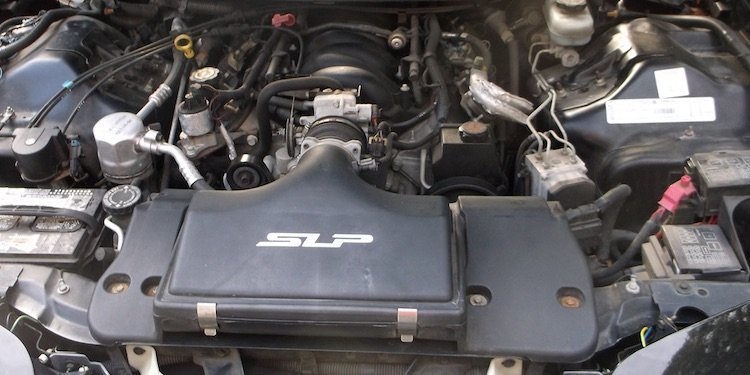 It’s a beautiful late summer day in 2003.  I am on my way back to college in Georgia from my home in southern PA.  The music is blaring loud on the radio of my souped up 1988 Camaro Iroc-z.  You can barely hear the radio over the scream of the 3” dual exhaust.  The car itself is what most people would charitably call a hooptie.

As we near the mid point of my thousand mile drive I push the car up to 70 MPH and move to the far right lane to pass some cars.  I-95 is relatively clear at 9am on this particular Saturday.   Just as the car settles down into gear it happens.

Suddenly the car slams violently backward and down in one swift movement.   The whole car shudders and I’m shoved against my seat belt.   My view momentarily is only of the pavement in front of me.  My muscles tense and my drivers training kicks in, but before I can even respond the next hit comes.  The car comes back up somewhat and just as it does, WHAM.  A giant blurry object maybe 2 1/2 feet in diameter slams through the giant hood of the muscle car and then careens off into a ditch 5 feet from the still very much out of control car….

How did I end up in this moment?  Well it all starts with a  hobby.  Back in my college days I was obsessed with cars.  I picked up the hobby of auto crossing and open tracking.  What are these?  Well auto crossing is where you lay cones down in a parking lot and see who can traverse them in the shortest time.  Open tracking is when a group of like minded people rent a race track and drive around it at way above legal speeds in a  controlled manner to broaden their driving skills.  I did a significant amount of both back in the day.

This particular hobby was very expensive.  Most folks where burning through a $300-$400 dollar set of tires in a  single track day.  Brake pads also tended to be cooked after a long day.  Add in any type of insurance and to be done legitimately probably required a $1000 an open track event budget.

The problem, I was a college student living on student loans with little money and a lot of free time.  So of course I did my own work and my budget was more like $50 an event.  I once completely did the suspension on that Camaro in an apartment parking lot in an afternoon (much to the landlords chagrin I suspect).   Even the car was cheap, I paid $1000 dollars for it, if memory serves.    For any work I really skimped, using whatever parts I could get my hands on for cheap.  Therein lies the start of our little adventure.

Making Changes to the Car on a Shoe String

Shortly before my trip back to school I made 2 major changes to the old Camaro.  The first, I installed the aforementioned loud exhaust.    The exhaust was actually causing me issues on the lead up to that day as it was rubbing against other parts of the car when I hit bumps.  This made  a dreadful racket.  It’s likely the racket that covered up the true problem as I suspect the real issue was also causing some noise before the event.  I didn’t hear it until it was too late.

Skimping on Safety, Buying from a Junk Yard

The second was I replaced the rotors and studs on the Camaro.  Being too poor to buy new or aftermarket options I instead went to my local junk yard pull apart and purchased a used rotor and some studs.  I installed them a week before my trip.

What I didn’t know with the rotor install was the prior life of that rotor or even how long it sat at that junkyard.  Apparently it was quite a while, because the rotor is what caused that violent movement that fateful morning.  The studs holding the wheel to the rotor and wheel hub catastrophically failed.

Which really gets to the point of this piece.  Frugality and saving money are important.  There are many things you should strive to keep the costs down on.  Safety items are not one of those things.  Now I am not suggesting that you need to buy the newest car or have the latest safety gadgets.  I’m not even suggesting you can’t buy many things used.  What I am suggesting is there is certain safety equipment you should never skimp on just to save a few bucks.  The aforementioned car rotor is one.  There are many others.

Want another example for those without kids? Like to do a riskier sport like rock climbing?  Think twice about buying used belay equipment.  Basically I recommend against  buying anything used that can have its performance degraded without visual impact and is designed to actively protect you in case of danger.

One final example, just because this is so ridiculous I couldn’t help but mention it.  We recently went looking to buy a few new smoke detectors for our house.  Did you know people actually sell, and thus I assume buy, used smoke detectors.  Just say no.

It doesn’t end with not buying used though.  There are other ways to save money that can be just as dangerous.

Do It Yourself, When Done Wrong, Can be Unsafe

The whole do it yourself movement comes to mind.   As a frugal person I enjoy do it yourself as much as the next blogger.  But some things you shouldn’t do yourself if you don’t know what you are doing. Say you need to install a new light fixture in your home.  Sure you could pay an electrician to do it, but why you say?  Why not install it yourself.  I’ll tell you why.  If you get it wrong you could electrocute yourself or worse burn your house down at some future point.

You could also in theory install your own Furnace in your house.  Good for you if you have the knowledge.  However given the risk of explosion if you do it wrong this is not something you should wing.    There are certain do it yourself projects where Youtube is just not sufficient.

Anyway you get the message I hope.  Before we finish up this post let’s get you caught up with the end of my Camaro story.

My Wild Ride to Safety

That sudden jerk down and backward of the car was the initial hit of the rotor sans wheel on the ground.  The big object, yeah that was the now free flying wheel itself going through the hood. My brain didn’t process any of that as I fought for control of the car.  Instead my instincts and car control training kicked in and I thought of nothing but survival.  After the wheel careened out of view the car continued to bounce up and down violently as the car shaved off speed.    I wrestled with the wheel to keep things straight and get the car off the road and onto the shoulder away from other vehicles.

Ultimately, somehow, I got the car skidded to a stop on the shoulder of the highway.  To this day I consider myself stupendously lucky the car didn’t flip, careen out of control, or get hit by someone else.     My nerves were, needless to say, fully shot.

The car was surprisingly not in too bad a shape after the ordeal. The at fault rotor was grinded down to the wheel hubs.    I found the wheel and tire about 200 yards down the road in the ditch.  The wheel survived but the tire did not.  The old Camaro needed new shocks and lower control arms.  Altogether the total dollar damage was  around $800.  I also wasn’t hurt other then my pride.   For want of saving about $50 on new rotors I had cost myself $800 and nearly lost my life.  At least the lesson was learned before something worse happened.